Until 1844 Dalwood formed part of the Liberty of Fordington and the adjoining parish of Stockland belonged to Milton Abbey - as a result together they formed a detached part of the County of Dorset.  According to "Dalwood - A Short History of an East Devon Village" by Dalwood historian the late Geoffrey Chapman, a Henry Hanne appears in the Dalwood Manor Court Rolls of 1540. He is shown as the reeve - the official who administered the manor. Whether he was a resident of the village who had been appointed to this position or somebody who had been brought in from elsewhere by the Lord of the Manor is unknown.

The manor itself was, at the time in the hands of the Warre family of Hestercombe in Somerset although nobody from the family lived in the village - until, that is, a cadet branch of the family moved in for about 100 years. This is evidenced by the presence in the parish registers of ten Warre entries - starting in 1532 not long before Henry Hanne appears and ending in 1635.

The fact that there are few Hann entries in the Dalwood registers could indicate that Henry had been moved in, or that he had a young family at the time who were born before the registers commenced and only appeared once they started marrying and having children. The first entry is not until 1560 when William Han married Jean Raddon, followed in 1575 by a son of Roberte Hand, in 1576 by a son of Thomas Han and in 1578 the marriage of Agnes Han to Ralph Abbot.

That there are no marriages of Roberte or Thomas may show that the family had in fact been brought in from elsewhere and arrived in Dalwood as required. This would not be unusual and is paralleled in the Cornish Roman Catholic Hannes of St Mawgan-in-Pyder and Cardinham (on Bodmin Moor), who served the household of a major Roman Catholic family - the Arundells, a cadet branch of whom moved later to Wardour Castle in Wiltshire. They also, at one time, held the manor of Marnhull (another Hann stronghold)

I do not know whether they were related to these Hannes or others who appeared in other areas of Cornwall during the first half of the C17th in Maker (at the mouth of the River Tamar) and Sancreed/Madron (on the Lizard) both of which disappeared before re-appearing at Sancreed in the first half of C18th and ultimately changing their name to Hand, though there was possibly a connection between the Roman Catholic Hanne family and those on the Devon/Cornwall border between Launceston and Tavistock, a branch of which may have become the 'Hanns' family of Lifton and Marystow.  There was also a 'Han(n)ce' family in Helston (near Sancreed/Madron) at one time

Members of the Roman Catholic Hanne family became surgeons and solicitors, though the solicitors in south west London that bears the name of HCL Hanne was not founded by this family.  Instead, possibly as a Victorian affectation to benefit from the qudos of the Hanne name, it was founded by a member of the Dalwood Hann family, grandson of Cornelius Hann of Yeovil, two of whose sons adopted the Hanne spelling when they moved to London. One of these even carried the ‘e’ ending to extremes by calling his house ‘Yeoville’ - rather strange for a fish salesman.

Within Dalwood the Hanns appear to have lived at Combshead, Hawley and Ford - three farms in the northwest of the parish near the boundary with Stockland, Cotleigh, Offwell and Widworthy parishes. This may explain their gradual appearance in the adjoining parishes’ records and their decline in the Dalwood ones. Unfortunately there are a number of gaps in the Dalwood records so it has not been possible to date to link together all the various members of the Hann/Hand families that appear in the registers.

At the same time that the Hanns were spreading into Offwell and Stockland, other members of the family were moving off to other places within East Devon and further parts of Devon.  By 1617 Henry Hande had moved over the parish border to Widworthy before moving on to Woodbury (part of this family then moved on to Harpford and Ottery St Mary).  In 1626 a Roger Han married in Colyton, in 1679 a Robert Hand married in Colyton and by 1686 a John Hann had also moved to Widworthy on his way to Farway.  In 1737 a William Hann, Hanne or Hand was having children in Tiverton and in 1748 an Alexander Hann was having children in Plymouth (Alexander being a name at this time only known to appear in the Harpford/Ottery St Mary family).

However, without exception so far, all of these Devon branches disappeared over the years.  In the 1780s a Charles Hann or Hanne and a John Hann appeared in Exeter, but their children again disappeared as did the children of a so far unconnected Robert Hanne who was there at the beginning of the 1800s.

The only Devon family that I've been able to follow is that of Henry Hann who married in Ottery St Mary in 1759 (so could have been related to the old Henry Hande of 1617).  He moved on to Topsham and Devonport - his grandson Edward marrying a Jane Barnicoat in 1831. This branch seems to have finished with the deaths of his son John Barnicott Hann in 1894 in Kensington, Greater London and John's nephew Robert Barnicot Hann in Paddington, Greater London in 1885.  John's brother Robert Barnicott Hann, ran Hann, Clayton and Co a department store employing 22 people in the sale of bedding and furniture at Paddington House, 1-4 Paddington Green, Paddington, Greater London in the 1861 census.  In 1875 the store was demolished for the Harrow Road improvement scheme and Robert had disappeared by the 1881 census. John was also missing in 1881, so it is possible that Robert had left the country and John was with him at the time. 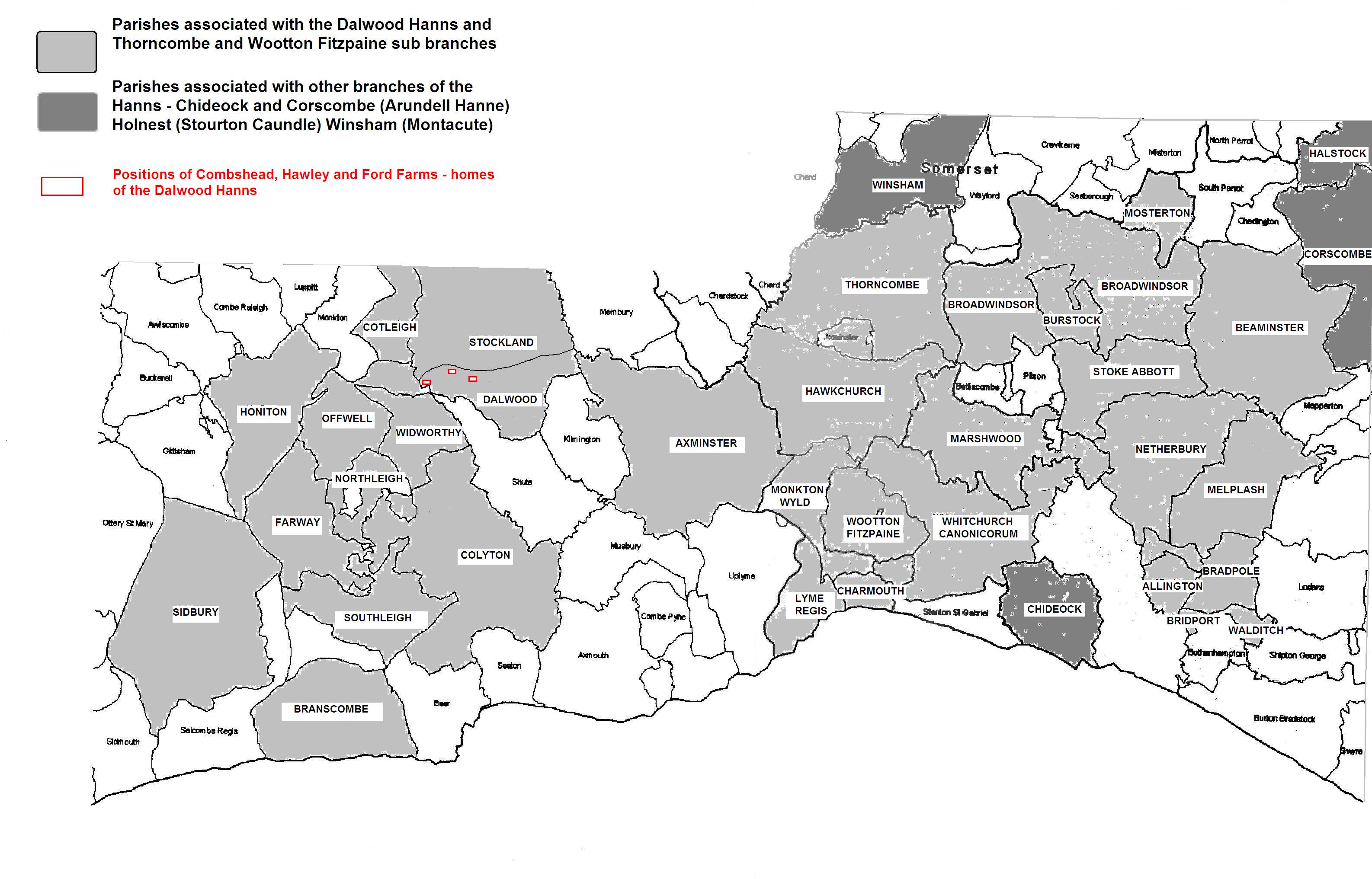 This leaves us with John Hann of Dalwood who died in 1730 - my branch.

John Hann first appeared in Stoke Abbott parish records on 30th June 1680 when he married Mary Roper. There were no Hanns in the Stoke Abbott records prior to this, so it looks as if John moved to the village either as an adult or just in order to marry.

Assuming that he was around 25 when he married, he would have been about 1655. Unfortunately, the records for Dalwood for this period are missing, so it has not been possible to confirm his parentage from these. The reason that I believe that John came to Stoke Abbott from Dalwood rather than anywhere else are as follows. The will of 'Joane Hann widdow of Coombs=head in the parrish of Dallwood' dated 8th July 1698 named William Hann of Hanley in Dalwood and John Board, also of Hanley, as her executors. The will was witnessed by Henry Seymour, amongst others. When the inventory following her death was completed on 8th May 1700 William Hann appears to have died, as it was completed by Henry Seymour, William Dommett of Kilmington, Devon and John Hann, husbandman, of Abbots-stock.

There was, therefore, a connection between the Hanns of Dalwood and a John Hann of Stoke Abbott (Abbotts-stock). This John Hann had a son also called John who was christened in January 1683. I believe that they were John Hanne the son and John Hanne the grandson mentioned in the will, dated 17th February 1693, of 'John Hanne the Elder of Dallwood'.

The use of John Hanne the Elder should imply that there were two adult John Hanns in Dalwood at the time (the grandson John being 10 years old at the time), John the son having returned to Dalwood following the death of his wife, Mary nee Roper in 1690.  Or it might merely implied that there were two John Hanns 'belonging' to the parish of Dalwood.  John the son had certainly returned to Stoke Abbott by 25 April 1693 to marry Mary Turner and had a second family by her.

It would then appear that they moved back to Dalwood to look after the family farm following the death of John's mother Mary in 1713 and that he was the John Han 'husbandman of Dallwood' who made his will in 1730 and was buried there shortly afterwards. Mary then returned to Stoke Abbott and was buried there in 1750. This supposition is based on the burials of two Mary Hanns in Stoke Abbott, but no John burial.

The Hanns of Stoke Abbott, therefore, continued through the children of John's second marriage - of which there were eight. The four eldest, all girls, moving away from the village, the eldest son Roger (born 1704) having had an illegitimate son in 1738 left the village and vanished. The three remaining sons Henry (1706-?), William (1710-1790) and Arthur (1715-1783) heading the three branches of the family that over the years left the village, so that by the Great War there were no Hanns in Stoke Abbott at all - with the exception of George Hand (cousin of Thomas Hardy) of Melbury Osmond who had moved into the village from Yetminster and died there in 1935